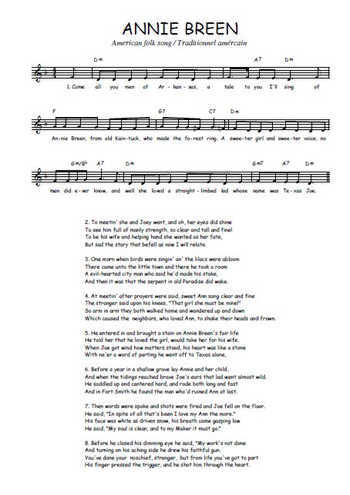 1. Come all you men of Arkansas, a tale to you I'll sing
Of Annie Breen, from old Kaintuck, who made the forest ring.
A sweeter girl and sweeter voice, no man did ever know,
And well she loved a straight-limbed lad whose name was Texas Joe.
2. To meetin' she and Joey went, and oh, her eyes did shine
To see him full of manly strength, so clear and tall and fine!
To be his wife and helping hand she wanted as her fate,
But sad the story that befell as now I will relate.
3. One morn when birds were singin' an' the lilacs were abloom
There came unto the little town and there he took a room
A evil-hearted city man who said he'd made his stake,
And then it was that the serpent in old Paradise did wake.
4. At meetin' after prayers were said, sweet Ann sang clear and fine
The stranger said upon his knees, "That girl she must be mine!"
So arm in arm they both walked home and wandered up and down
Which caused the neighbors, who loved Ann, to shake their heads and frown.
5. He entered in and brought a stain on Annie Breen's fair life
He told her that he loved the girl, would take her for his wife.
When Joe got wind how matters stood, his heart was like a stone
With ne'er a word of parting he went off to Texas alone.
6. Before a year in a shallow grave lay Annie and her child,
And when the tidings reached brave Joe's ears that lad went almost wild.
He saddled up and cantered hard, and rode both long and fast
And in Fort Smith he found the man who'd ruined Ann at last.
7. Then words were spoke and shots were fired and Joe fell on the floor.
He said, "In spite of all that's been I love my Ann the more."
His face was white as driven snow, his breath came gasping low
He said, "My soul is clean, and to my Maker it must go."
8. Before he closed his dimming eye he said, "My work's not done
And turning on his aching side he drew his faithful gun.
You've done your mischief, stranger, but from life you've got to part
His finger pressed the trigger, and he shot him through the heart.

Banks of the Sacramento

The battle of New Orleans

The lily of Arkansas