La partition « The Banks Of Claudy » 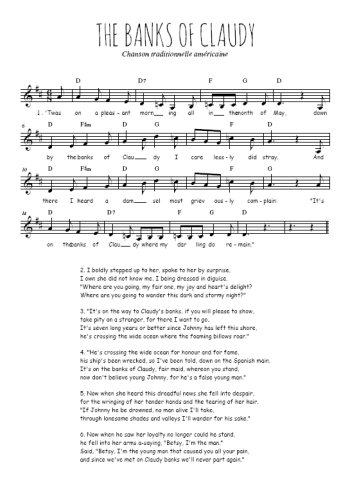 1 . 'Twas on a pleasant morn ing all in the month of May,
Down by the banks of ClaudyI care lessly did stray.
And there I heard a dam sel most griev ously complain:
"It's on the banks of Clau dy where my dar ling do remain."

2. I boldly stepped up to her, spoke to her by surprise,
I own she did not know me, I being dressed in diguise.
"Where are you going, my fair one, my joy and heart's delight?
Where are you going to wander this dark and stormy night?"

3. "It's on the way to Claudy's banks, if you will please to show,
take pity on a stranger, for there I want to go.
It's seven long years or better since Johnny has left this shore,
he's crossing the wide ocean where the foaming billows roar."

4. "He's crossing the wide ocean for honour and for fame,
his ship's been wrecked, so I've been told, down on the Spanish main.
It's on the banks of Claudy, fair maid, whereon you stand,
now don't believe young Johnny, for he's a false young man."

5. Now when she heard this dreadful news she fell into despair,
for the wringing of her tender hands and the tearing of her hair.
"If Johnny he be drowned, no man alive I'll take,
through lonesome shades and valleys I'll wander for his sake."

6. Now when he saw her loyalty no longer could he stand,
he fell into her arms a-saying, "Betsy, I'm the man."
Said, "Betsy, I'm the young man that caused you all your pain,
and since we've met on Claudy banks we'll never part again."

Jump down turn around