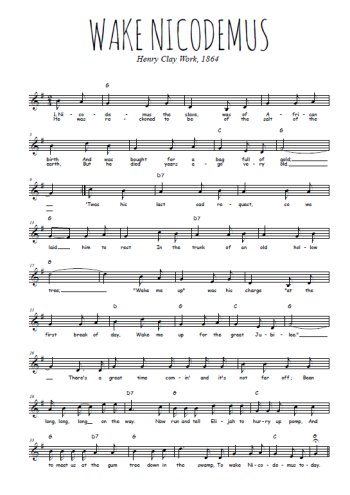 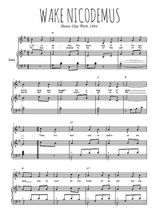 1. Nicodemus the slave, was of African birth
And was bought for a bag full of gold;
He was reckoned to be of the salt of the earth,
But he died years ago very old.
'Twas his last sad request, so we laid him to rest
In the trunk of an old hollow tree;
"Wake me up" was his charge "at the first break of day,
Wake me up for the great Jubilee."

The "good time coming" is almost here,
It was long, long, long on the way.
Now run and tell Elijah to hurry up pomp,
And to meet us at the gum tree down in the swamp,
To wake Nicodemus today.

2. He was known as a prophet, at least was as wise,
For he told of the battles to come;
And we trembled with dread when he rolled up his eyes,
And we heeded the shake of his thumb.
Though he clothed us with fear, yet the garments he wore
Were in patches at elbow and knee;
And he still wears the suit that he used to of yore
As he sleeps in the old hollow tree.

3. Nicodemus was never the sport of the lash,
Though the bullet has oft crossed his path;
There were none of his masters so brave or so rash
As to face such a man in his wrath.
Yet his great heart of kindness was filled to the brim,
He obeyed who was born to command;
But he longed for the morning which then was so dim,
For the morning which now is at hand.

4. Twas a long weary night, we were almost in fear
That the future was more than he knew;
Twas a long weary night but the morning is near
And the words of our prophet are true.
There are signs in the sky that the darkness is gone,
There are tokens in endless array;
While the storm which had seemingly banished the dawn,
On hastens the event of the day.

The hornet and the peacock