La partition « Underneath her apron » 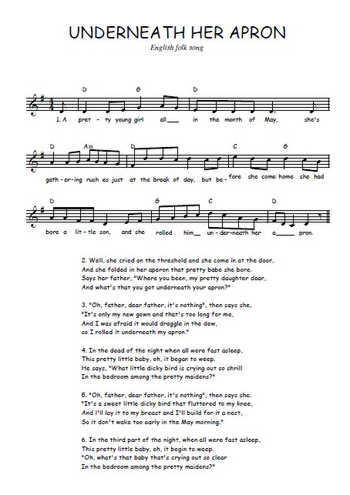 1. A pretty young girl all in the month of May,
She's gathering rush es just at the break of day,
But before she come home she had bore a little son,
And she rolled him underneath her a pron.

2. Well, she cried on the threshold and she come in at the door,
And she folded in her aperon that pretty babe she bore.
Says her father, "Where you been, my pretty daughter dear,
And what's that you got underneath your apron?"

3. "Oh, father, dear father, it's nothing", then says she,
"It's only my new gown and that's too long for me,
And I was afraid it would draggle in the dew,
so I rolled it underneath my apron."

4. In the dead of the night when all were fast asleep,
This pretty little baby, oh, it began to weep.
He says, "What little dicky bird is crying out so shrill
In the bedroom among the pretty maidens?"

5. "Oh, father, dear father, it's nothing", then says she.
"It's a sweet little dicky bird that fluttered to my knee,
And l'll lay it to my breast and I'll build for it a nest,
So it don't wake too early in the May morning."

6. In the third part of the night, when all were fast asleep,
This pretty little baby, oh, it begin to weep.
"Oh, what's that baby that's crying out so clear
In the bedroom among the pretty maidens?"

7. "Oh, father, dear father, it's nothing", then says she,
"It's just a pretty baby that someone gave to me.
Let it lie, let it sleep this night along with me,
And l'll tel l you its daddy in the May morning."

8. "Oh, was it by a black man or was it by a brown,
Or was it by a ploughing-boy a-ploughing up and down,
That give you the stranger to wear with your new gown,
That you rolled up underneath your apron?"

9. "lt's neither by a black man, it's neither by a brown,
I got it from a sailor boy that ploughs the watery main.
It was him gave me the stranger to wear with my new gown,
That I rolled it underneath my apron."

10. "Oh, was it in the kitchen got, or was it in the hall?
Was it in the cow-shed or up again the wall?
I wish I had a firebrand to burn the building down,
Where you met with him on a May morning."