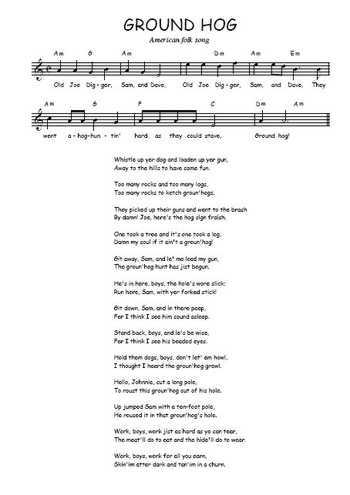 Whistle up yer dog and loaden up yer gun,
Away to the hills to have some fun.

They picked up their guns and went to the brash
By damn! Joe, here's the hog sign fraish.

One took a tree and it's one took a log,
Damn my soul if it ain't a groun'hog!

Git away, Sam, and le' me load my gun,
The groun'hog hunt has jist begun.

Git down, Sam, and in there peep,
Fer I think I see him sound asleep.

Stand back, boys, and le's be wise,
Fer I think I see his beaded eyes.

Hello, Johnnie, cut a long pole,
To roust this groun'hog out of his hole.

Up jumped Sam with a ten-foot pole,
He roused it in that groun'hog's hole.

Work, boys, work jist as hard as ye can tear,
The meat'll do to eat and the hide'll do to wear.

Work, boys, work for all you earn,
Skin'im atter dark and tan'im in a churn.

Stand back, boys, le' me git my breath,
Ketchin'this groun'hog's might' nigh death.

I heerd' im give a whistle and a wail,
I've wound my stick right in his tail.

Stand back, boys and gi' me a little air
I've got a little o' the groun'hog's hair

Here he comes right in a whirl,
He's the biggest groun'hog in this worl'

Sam cocked his gun and Dave pulled the trigger,
But the one killed the hog was old Joe Digger.

They took'im by the tail and wagged' im to a log,
And swore by gosh! he's a hell of a hog!

Up stepped Sal with a snigger and a grin:
Whatcha goin' to do with the groun'hog skin?"

Scrapes' im down to his head and feet,
By damn, Sam, I here's a fine pile o' meat!

Carried him to the house and skinned 'im out to bile,
I bet forty dollar you could smell' im fifty mile.

They put' im in the pot and all begin to smile,
They eat that hog before he struck a bile.

The children screamed and the children cried,
They love groun'hog cooked and fried.

Hello, boys, ain't it a sin,
Watch that gravy run down Sam's chin!

Watch' im, boys, he's about to fall,
He's eat till his pants won't button at all.

He eat that grease till it run to his nabel
He'll eat no more hog until he's able.

I gave my love a cherry