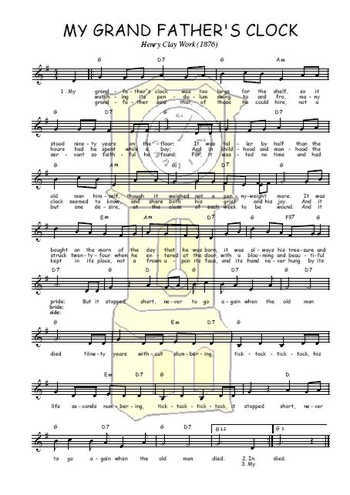 1. My grandfather's clock was too large for the shelf, so it stood ninety years on the floor;
It was taller by half than the old man himself, though it weighed not a pennyweight more.
It was bought on the morn of the day that he was born, it was always his treasure and pride;

2. In watching its pendulum swing to and fro, many hours had he spent while a boy;
And in childhood and manhood the clock seemed to know, and share both his grief and his joy.
And it struck twentyfour when he entered at the door, with a blooming and beautiful

3. My grandfather said that, of those he could hire, not a servant so faithful he found;
For, it wasted no time and had but one desire, at the close of each week to be wound.
And it kept in its place, not a frown upon its face, and its hand never hung by its

Once in royal David's city