La partition « On the Duke of Marlboroughs Victory over the French » 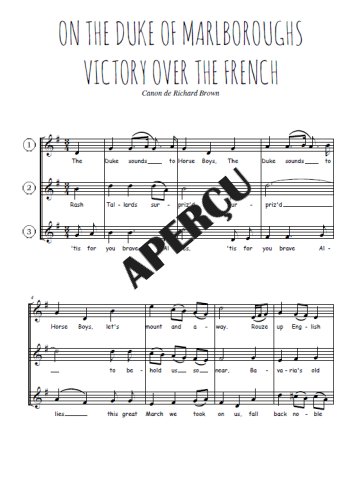 The Duke sounds to Horse Boys,
Let's mount and away.
Rouze up English Courage, rouze up,
We can't lose the Day.
Remember the feats by our Ancestors done,
Where Englishmen fight, fight, fight, fight, fight, fight
Fight to be sure the French run;
Rash Tallards surpriz'd, surpriz'd to behold us so near,
Bavaria's old Courage is sunk, is sunk in despair,
Lead on the Attack, then our Friends shall come after,
We'll enliven their Spirits, we'll enliven their Spirits,
Their Spirits, by our Enemies slaughter.
'tis for you brave Allies, 'tis for you brave Allies this great
March we took on us, fall back noble Germans'
And only, only look on us,
We'll show you how easy the Conquest is made,
Three English Huzzah's, Huzzahs,
Huzzahs strike the Frenchmen all dead.