La partition « The constitution and the guerriere » 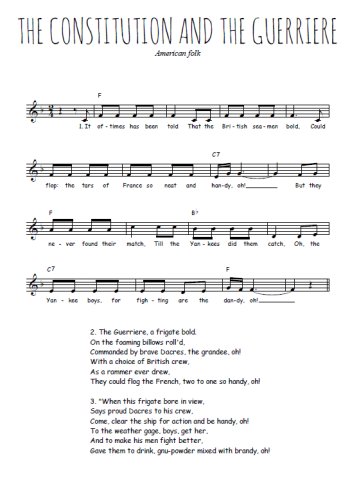 1. It oftimes has been told
That British seamen bold,
Could flop: the tars of France so neat and handy, oh!
But they never found their match,
Till the Yankees did them catch,
Oh, the Yankee boys, for fighting are the dandy, oh!

2. The Guerriere, a frigate bold.
On the foaming billows roll'd,
Commanded by brave Dacres, the grandee, oh!
With a choice of British crew,
As a rammer ever drew,
They could flog the French, two to one so handy, oh!

3. "When this frigate bore in view,
Says proud Dacres to his crew,
Come, clear the ship for action and be handy, oh!
To the weather gage, boys, get her,
And to make his men fight better,
Gave them to drink, gnu-powder mixed with brandy, oh!

4. The British shot flew hot,
Which the Yankees answered not,
Till they got within the distance they call handy, oh!
Now, says Hull unto his crew,
Boys, let's see what we can do,
If we take this boasting Briton we're the dandy, oh!

5. Then the first broadside we poured,
Carried her mainmast by the board,
Which made this lofty frigate look abandoned, oh!
Then Dacres shook his head,
And to his officers he said,
Lord, I didn't think these Yankees were so handy, oh!

6. Our second told so well,
That their fore and mizzen fell,
Which dous'd the royal ensign so handy, oh I
By George, says he, we're done.
And then fired a lee gun,
While the Yankees struck up Yankee doodle dandy, oh!

7. Then Dacres came on board,
To deliver up his sword.
Loth was he to part with it, it was so handy, oh!
Oh, keep your sword, says Hull,
For it only makes you, dull,
So cheer up, come, let us have a little brandy, oh!

The hornet and the peacock