La partition « Banks of the Bann » 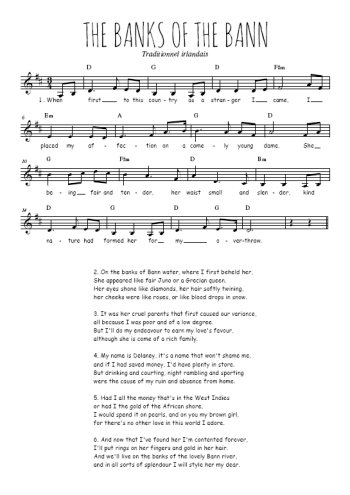 1. When first to this country as a stranger I came,
I placed my affection on a comely young dame.
She being fair and tender, her waist small and slender,
Kind nature had formed her for my over­throw.

2. On the banks of Bann water, where I first beheld her,
She appeared like fair Juno or a Grecian queen.
Her eyes shone like diamonds, her hair softly twining,
her cheeks were like roses, or like blood drops in snow.

3. It was her cruel parents that first caused our variance,
all because I was poor and of a low degree.
But I'll do my endeavour to earn my love's favour,
although she is come of a rich family.

4. My name is Delaney, it's a name that won't shame me,
and if I had saved money, I'd have plenty in store.
But drinking and courting, night rambling and sporting
were the cause of my ruin and absence from home.

5. Had I all the money that's in the West Indies
or had I the gold of the African shore,
I would spend it on pearls, and on you my brown girl,
for there's no other love in this world I adore.

6. And now that I've found her I'm contented forever,
I'll put rings on her fingers and gold in her hair.
And we'll live on the banks of the lovely Bann river,
and in all sorts of splendour I will style her my dear.

L.S. will you please let me know how i can download
banks of the Bann
i have no twitter or facebook
(partition gratuite)
kind regards,
Mart van Lieshout.

Wearing of the green

The boys from the County Armagh

The wearing of the Green