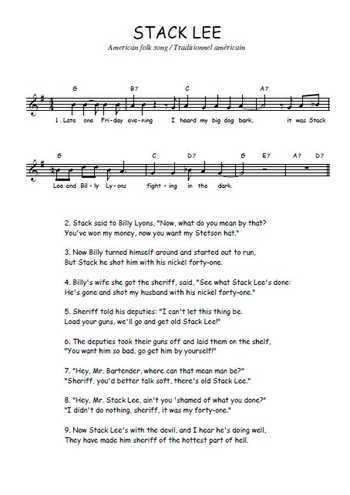 1. Late one Friday evening I heard my big dog bark,
It was Stack Lee and Billy Lyons fighting in the dark.

2. Stack said to Billy Lyons, "Now, what do you mean by that?
You've won my money, now you want my Stetson hat."

3. Now Billy turned himself around and started out to run,
But Stack he shot him with his nickel fortyone.

4. Billy's wife she got the sheriff, said, "See what Stack Lee's done:
He's gone and shot my husband with his nickel fortyone."

5. Sheriff told his deputies: "I can't let this thing be.
Load your guns, we'll go and get old Stack Lee!"
6. The deputies took their guns off and laid them on the shelf,
"You want him so bad, go get him by yourself!"

9. Now Stack Lee's with the devil, and I hear he's doing well,
They have made him sheriff of the hottest part of hell.

Tenting on the old camp ground

Hwi Ne Ya He