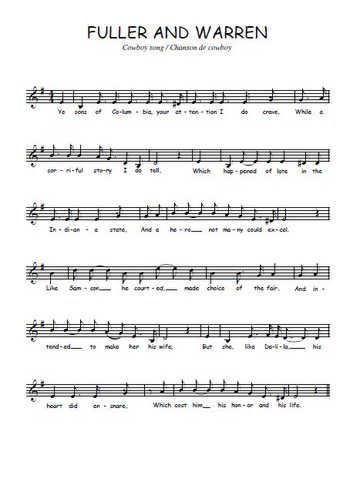 Ye sons of Columbia, your attention I do crave,
While a sorrowful story I do tell,
Which happened of late, in the Indiana state,
And a hero not many could excel;
Like Samson he courted, made choice of the fair,
And intended to make her his wife;
But she, like Delilah, his heart did ensnare,
Which cost him his honor and his life.

A gold ring he gave her in token of his love,
On the face was the image of the dove;
They mutually agreed to get married with speed
And were promised by the powers above.
But the fickle-minded maiden vowed again to wed
To young Warren who lived in that place;
It was a fatal blow that caused his overthrow
And added to her shame and disgrace.

When Fuller came to hear he was deprived of his dear
Whom he vowed by the powers to wed,
With his heart full of woe unto Warren he did go,
And smilingly unto him he said:
"Young man, you have injured me to gratify your cause
By reporting that I left a prudent wife;
Acknowledge now that you have wronged me, for although
I break the laws,
Young Warren, I'll deprive you of your life."

Then Warren, he replied: "Your request must be denied,
For your darling to my heart she is bound;
And further I can say that this is our wedding day,
In spite of all the heroes in town."
Then Fuller in the passion of his love and anger bound,--
Alas! it caused many to cry,--
At one fatal shot killed Warren on the spot,
And smilingly said, "I'm ready now to die."

The time was drawing nigh when Fuller had to die;
He bid the audience adieu.
Like an angel he did stand, for he was a handsome man,
On his breast he had a ribbon of blue.
Ten thousand spectators did smite him on the breast,
And the guards dropped a tear from the eye,
Saying, "Cursed be she who caused this misery,
Would to God in his stead she had to die."

The gentle god of Love looked with anger from above
And the rope flew asunder like the sand.
Two doctors for the pay they murdered him, they say,
They hung him by main strength of hand.
But the corpse it was buried and the doctors lost their prey,
Oh, that harlot was bribed, I do believe;
Bad women to a certainty are the downfall of men,
As Adam was beguiled by Eve.

I saw the beam in my sister's eye

Hunting for a city

God be with you