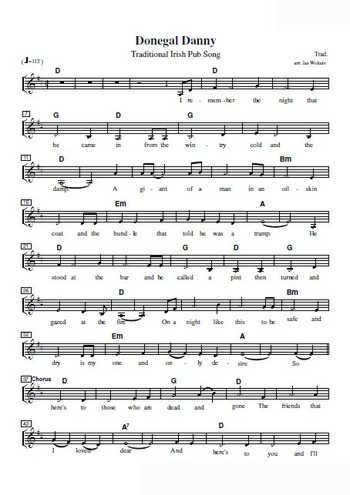 1. I remember the night that he came in
From the wintry cold and damp
A giant of a man in an oilskin coat
And the bundle that told he was a tramp
He stood at the bar and he called a pint
Then turned and gazed at the fire
On a night like this to be safe and dry
Is my one and only desire

2. Then in a voice that was hushed and low
He said: Listen I'll tell you a tale
How a man of the sea became a man of the roads
And never more will set sail
I've fished out of Howth and Killybegs
Ardglass and Baltimore
But the cruel sea has beaten me
And I'll end my days on the shore
[...]

Let him go, let him tarry

Banks of the Bann

Wearing of the green

The boys from the County Armagh