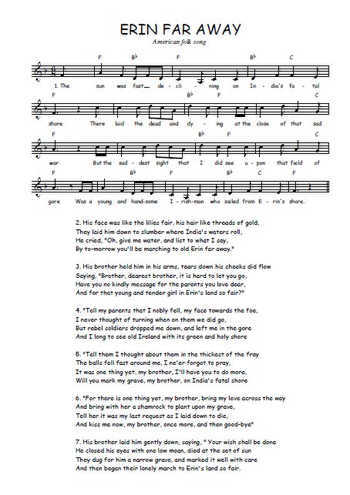 1. The sun was fast declining on India's fatal shore
There laid the dead and dying at the close of that sad war
But the saddest sight that I did see upon that field of gore
Was a young and handsome Irishman who sailed from Erin's shore

2. His face was like the lilies fair, his hair like threads of gold,
They laid him down to slumber where India's waters roll,
He cried, "Oh, give me water, and list to what I say,
By to-morrow you'll be marching to old Erin far away."

3. His brother held him in his arms, tears down his cheeks did flow
Saying, "Brother, dearest brother, it is hard to let you go,
Have you no kindly message for the parents you love dear,
And for that young and tender girl in Erin's land so fair?"

4. "Tell my parents that I nobly fell, my face towards the foe,
I never thought of turning when on them we did go,
But rebel soldiers dropped me down, and left me in the gore
And I long to see old Ireland with its green and holy shore

5. "Tell them I thought about them in the thickest of the fray
The balls fell fast around me, I ne'er forgot to pray,
It was one thing yet, my brother, I'll have you to do more,
Will you mark my grave, my brother, on India's fatal shore

6. "For there is one thing yet, my brother, bring my love across the way
And bring with her a shamrock to plant upon my grave,
Tell her it was my last request as I laid down to die,
And kiss me now, my brother, once more, and then good-bye"

7. His brother laid him gently down, saying, " Your wish shall be done
He closed his eyes with one low moan, died at the set of sun
They dug for him a narrow grave, and marked it well with care
And then began their lonely march to Erin's land so fair.

All the pretty little horses

Down in the valley