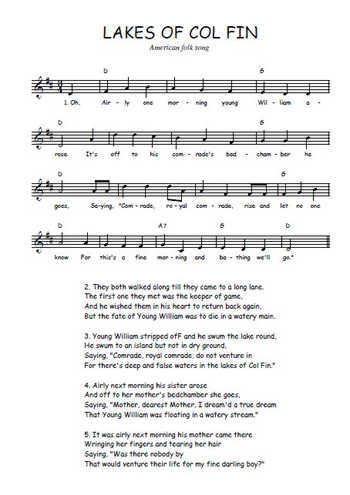 1. Airly one morning young William arose.
It's off to his comrade's bedchamber he goes,
Saying, "Comrade, royal comrade, rise and let no one know
For this is a fine morning and bathing we'll go."

2. They both walked along till they came to a long lane.
The first one they met was the keeper of game,
And he wished them in his heart to return back again,
But the fate of Young William was to die in a watery main.

3. Young William stripped ofF and he swum the lake round,
He swum to an island but not in dry ground,
Saying, "Comrade, royal comrade, do not venture in
For there's deep and false waters in the lakes of Col Fin."

4. Airly next morning his sister arose
And off to her mother's bedchamber she goes,
Saying, "Mother, dearest Mother, I dream'd a true dream
That Young William was floating in a watery stream."

5. It was airly next morning his mother came there
Wringing her fingers and tearing her hair
Saying, "Was there nobody by
That would venture their life for my fine darling boy?"

6. Airly next morning his uncle came there.
He rowed round the strand like a man in despair.
His uncle stripped himself and swum the lake round
And he swum to the island where William was found.

7. Saying, "Comrade, royal comrade, do not venture in
For there's deep and false waters in the lakes of Col Fin."

8. The day of his funeral, it was a great sight.
Four and twenty young men all dressed in white.
They took him up to Mary's church and laid him in the clay
Saying, "Farewell, lovely William, forever and a day."

9. God help his poor mother, she's got reason to mourn
And likewise his sweetheart for I'm sure she has more,
For every other morning he did her salute
With pinks and red roses and fine garden fruit.