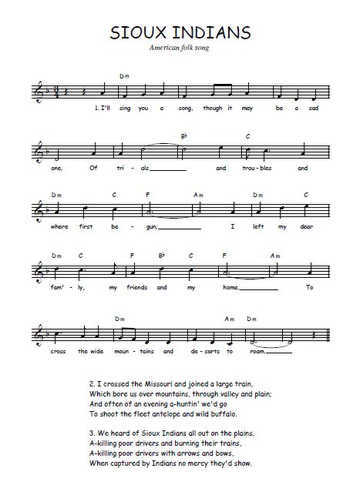 1. I'll sing you a song, though it may be a sad one,
Of trials and troubles and where first begun;
I left my dear fam'ly, my friends and my home,
To cross the wide mountains and deserts to roam.

2. I crossed the Missouri and joined a large train,
Which bore us over mountains, through valley and plain;
And often of an evening a-huntin' we'd go
To shoot the fleet antelope and wild buffalo.

4. We traveled three weeks till we come to the Platte,
A-pitching our tents at the head of the flat;
We spread down our blankets on the green shady ground
Where the mules and the horses were grazing around.

5. While taking refreshment, we heard a loud yell,
The whoops of Sioux Indians come up from the dell.
We sprang to our rifles with a flash in each eye
And says our brave leader, "We'll fight till we die."

6. They made a bold dash and they come near our train
The arrows fell around us like showers of rain,
But with our long rifles we fed them hot lead
Till a-many a brave warrior around us lay dead.

7. We shot their bold chief at the head of their band,
He died like a warrior with his bow in his hand.
When they saw their brave chief lie dead in his gore
They whooped and they yelled and we saw them no more.

8. In our little band there were just twenty-four,
And of the Sioux Indians five hundred or more;
We fought them with courage, we spoke not a word;
The whoop of Sioux indians was all could be heard.

9. We hooked up our horses and started our train;
Three more bloody battles this trip on the plain.
And in our last battle three of our brave boys fell,
And we left them to rest in the green shady dell.

Song of the fishes

I wish I had someone to love me