La partition « Lawn as white as the driven snow » 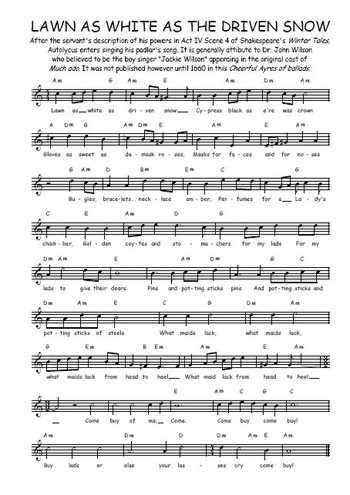 After the servant's description of his powers in Act IV Scene 4 of Shakespeare's Winter Tales,
Autolycus enters singing his padlar's song. It is generally attibute to Dr. John Wilson
who believed to be the boy singer "Jackie Wilson" apperaing in the original cast of
Much ado. It was not published however until 1660 in this Cheerful Ayres of ballads.

How should I your true love know

And will he not come again

I loath that I did love

King Stephen was a worthy peer

I loath that I did love

King Stephen was a worthy peer

The Bay of Biscay, Oh