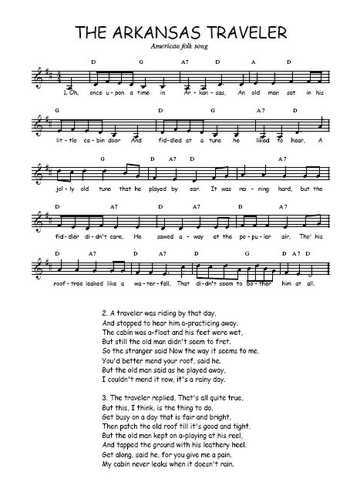 1. Oh, once upon a time in Arkansas,
An old man sat in his little cabin door
And fiddled at a tune that he liked to hear,
A jolly old tune that he played by ear.
It was raining hard, but the fiddler didn't care,
He sawed away at the popular air,
Tho' his rooftree leaked like a waterfall,
That didn't seem to bother him at all.

2. A traveler was riding by that day,
And stopped to hear him a-practicing away.
The cabin was a-float and his feet were wet,
But still the old man didn't seem to fret.
So the stranger said Now the way it seems to me,
You'd better mend your roof, said he.
But the old man said as he played away,
I couldn't mend it now, it's a rainy day.

3. The traveler replied, That's all quite true,
But this, I think, is the thing to do.
Get busy on a day that is fair and bright,
Then patch the old roof till it's good and tight.
But the old man kept on a-playing at his reel,
And tapped the ground with his leathery heel.
Get along, said he, for you give me a pain.
My cabin never leaks when it doesn't rain.

Banks of the Little Eau Pleine