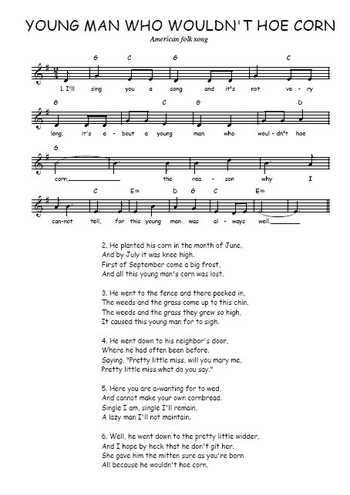 1. I'll sing you a song and it's not very long,
It's about a young man who wouldn't hoe corn,
The reason why I cannot tell,
For this young man was always well.

2. He planted his corn in the month of June,
And by July it was knee high.
First of September come a big frost,
And all this young man's corn was lost.

5. Here you are awanting for to wed,
And cannot make your own cornbread.
Single I am, single I'll remain,
A lazy man I'll not maintain.

6. Well, he went down to the pretty little widder,
And I hope by heck that he don't git her.
She gave him the mitten sure as you're born
All because he wouldn't hoe corn.

Banks of the Little Eau Pleine